Camping on the ice sheet in September/October was a new experience – I’d never seen darkness on the ice before! The lack of light pollution and cloud-free skies made for a truly spectacular display of the Northern Lights. It was -25C and 35 knot winds pretty much constantly, so it was a constant battle between wanting to get into a tent and warm up and not wanting to miss a second of watching the aurora dancing over the milky way, with passing satellites and the occasional shooting star. 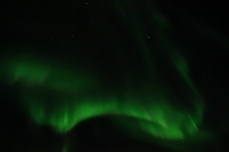 While on a personal level this was an incredible treat, it also presented some pretty major challenges for working with drones on the ice. The aurora knocked out the radio communications linking our drones to their controllers, meaning they could only be controlled over local wifi, reducing their range from a few hundred metres to about 30!

Inspired by a recent twitter exchange about this I bought Melanie Windridge’s book “Aurora” & thoroughly recommend it!