The lockdown has ended all hopes of spring field work this year, so I’ve been reminiscing about the last time I was out in Greenland, in winter 2018. We were on the ice for a second time to explore the moulins, which are large vertical pipes carved into the ice by melt water in summer – to learn about what can live down there and how water makes its way from the ice sheet surface to the sea. The experience of living on the ice sheet in the autumn/winter is truly unique – darkness and aurora and thick snow really bring out the magic of this environment. Here’s my recap of that adventure.

The Greenland ice Sheet is an enormous mass of ice that is almost 3km thick in the centre – and as it melts it releases water into the oceans, raising sea levels, and at the same time, because that ice acts like a mirror that reflects sunlight back into space, it makes the planet less reflective – accelerating global warming and causing more melting. There are lots of scientists working on this, either by going to the ice and making measurements of melt rates or the amount of water discharging from streams, or flying planes over the ice sheet or using satellite data to assess how the ice sheet is changing at the scale of the whole continent-sized mass. But at the same time, there is a bit of a gap in the knowledge – what happens to all the water that’s produced when the surface of the ice melts – how does the ice sheet’s plumbing work? It makes a big difference to predictions of sea level rise if that water is all flushed straight into the sea, or if it gets held up along the way. And what happens to all the biological material that gets mobilized by summer melting?

What we do know is that melt water carves out large rivers in the ice sheet. I took the photo below from the helicopter window during my transit onto the ice in summer 2016. There is a huge volume of water traveling through these beautiful rivers, and it’s all generated from the surface of the ice melting in the sun. But where does it all go?

Well, sometimes these rivers just seem to stop. Below is another photo I took from the same helicopter over the same river network – these huge river channels just suddenly end. And all that water suddenly stops traveling horizontally over the surface, and starts to drop in huge waterfalls inside the ice. This carves out enormous caves and tunnels in the body of the ice, forming a plumbing system for the ice sheet. Eventually, the water ends up in the ocean, but the details of that plumbing system really matters for how rapidly sea levels rise as Greenland’s ice melts.

So, this is what we set out to study – it is difficult to know what is happening under the surface using measurements from above – to really know we have to see for ourselves, with our eyes, and that means we needed to physically explore these caves by abseiling in and entering the world inside the ice.

I teamed up with a group of cave explorers led by my friend and Rolex colleague Francesco Sauro, and a team of cave photographers who have experience exploring caves all over the world. Together we returned to Greenland in the late autumn. It’s a very different experience at this time of year – the temperature was way below zero and it was often bitterly windy. This is essential though – we had to return when it was so cold that those enormous rivers had stopped flowing and frozen solid, so we could abseil into what were giant waterfalls in the summer, and were now solid entrances to giant ice caves.

We truly did not know what we would find when we arrived, but we had identified the locations of several likely caves – known as moulins – in satellite imagery and decided to camp an equal distance from three of the biggest, to give us best accessibility. The moment when the helicopter leaves us and our equipment on the ice is always memorable – a reminder that we are now stuck with just ourselves and the equipment we packed – at this moment we are all dangerously exposed to the changing conditions so we have to move quickly to build a camp.

Building the camp requires a lot of digging through the thick snow to find the ice underneath, then pitching the tent and anchoring it down to stop the tents from blowing away if the weather turns. It is basic, with one tent for cooking and eating, one tent for climbing and science equipment, and then one tent each to sleep in. We cook on a small gas stove and huddle in the mess in the evenings to help stay warm.

On nice calm days, the camp is a paradise. We were blessed with these conditions for several days when we arrived, and we were able to start exploring the caves. We walked along the frozen river channel until we found the entrance to the first moulin – we had absolutely no idea how deep this would be, or what we would find down there. There was lots of snow around the edges that looked a little dangerous, so we placed some anchors in the ice, connected a rope and moved to the edge to start sweeping some snow away to make the approach safer. The entrance to the cave was pitch black and we could see nothing, still with no clue as to how deep it would be – but Francesco dislodged a block of snow that tumbled into the hole with a crack and everyone held silent… silent… silent, and then BOOOOOM echoed up from the depths of the hole, a solid 8 seconds later – the length of the pause and the deep echo telling us that we were at the entrance to a monster. We carried on working to clear the entrance so we could get in there and start exploring. 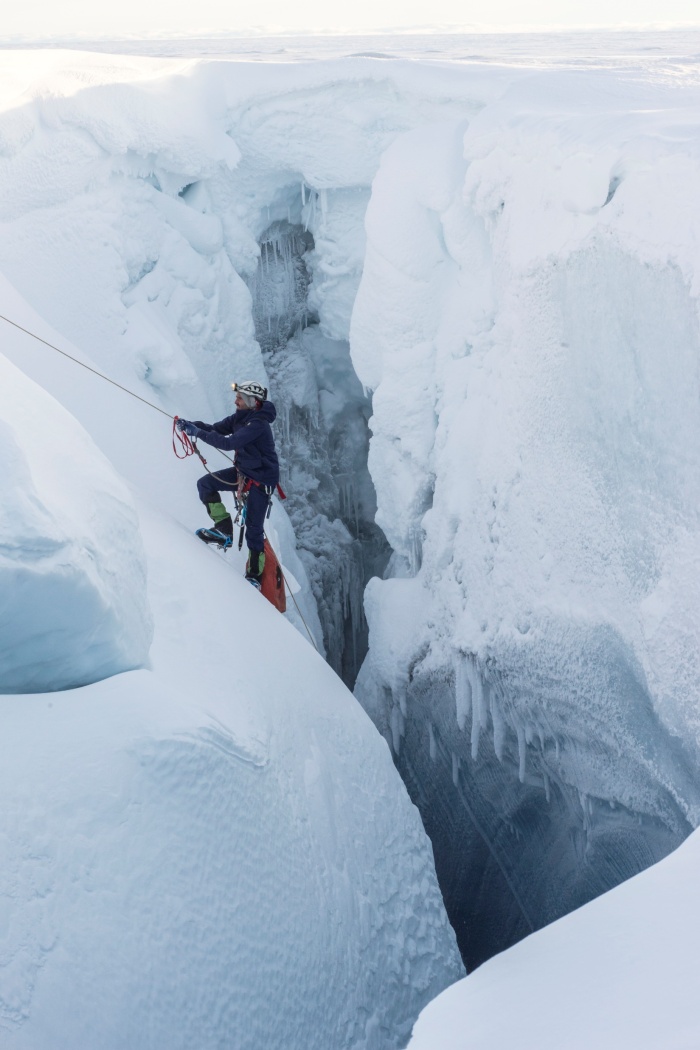 And so, we roped up, turned on our head torches and down we went, slowly into the darkness to see what we would find in the heart of the Greenland Ice Sheet.

We found an enormous cavern of ice, a cathedral hidden beneath the surface, with stalactites and stalagmites, tufa, flowstone, glassy smooth walls and overhangs, with subtle stripes from millennia of accumulation – everything sculpted in ice. It was incredible to realise that as we descended on our ropes, we were looking back in time, at ice that was getting older and older the deeper we went – abseiling past ice that hadn’t been exposed to the outside world for millennia.

I took samples of this old ice on the way down – especially where I found biological material that we know well from the surface of the ice sheet locked away behind the walls that must have been entombed there hundreds or thousands of years ago. This is one of the additional fascinating aspects of this exploration – with these biological samples we can look back to what conditions must have been like when they were exposed on the surface way back in history, using clues preserved in the DNA of microscopic creatures in the ice. This cold, dark icy world is also the closest thing we have on our planet to the kinds of ice we might find elsewhere in the solar system – for example on Europa or under the surface on Mars, so understanding how life manages to survive in these extreme conditions on Earth might help us to search for alien life elsewhere. What was also amazing was that at the bottom of this huge pipe cutting down into the ice sheet was a large lake – I’m not sure how big, but in the darkness I couldn’t see the other side – at least 20 m but perhaps much more. With a temperature below minus 25 at the surface, there is still liquid water at depth a source of warmth and a viable habitat for microscopic life.

After this initial exploration, we explored several other moulins, all with similar properties, and then returned home. Having bee excited by our explorations and eager to learn more and explore further, we returned the following year. The conditions were much harsher and we weathered a long, intense storm with -35 degree temperatures and gale force winds. 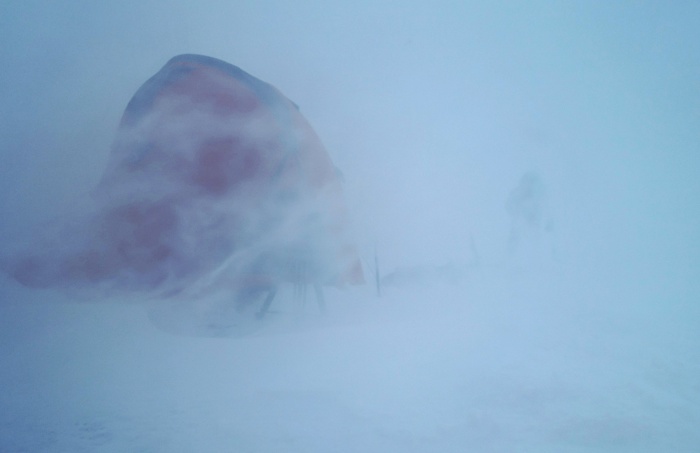 Suffice to say the camp was damaged and there was a lot of time spent huddled in the mess tent – one of the many benefits of camping with Italians is that even in extreme conditions they take their food and drink seriously – our camp was awash with coffee, chocolate, cheese and taralli – certainly not the usual freeze dried ration packs I’ve been used to in previous camps! But once the storm passed, we were able to start exploring again. The clouds parted and we enjoyed nights with the most stunning aurora… We were even able to enter some of the caves under the glow of the northern lights.

The caves we explored the second year were even more spectacular, with twisting, tortuous passages descending hundreds of meters into the ice. This time, we found no lakes at the bottom, but flat ground we could walk on. Another major difference in 2018 was that I had brought along with me a team of top flight scientists to help piece together the mysteries of the moulins – Dr Arwyn Edwards (@arwynedwards) and Melanie Hay were able to do DNA sequencing of samples I brought up from the moulins using new gene sequencers from Oxford Nanopore in a tent in -30 degree, windy conditions within a couple of hours – truly futuristic work. I also brought along Prof Alun Hubbard, who has a long history of working on the ice and the moulins in this area and was able to use a radar to map the internal structure of some of the caves.

The data from these expeditions is still being analysed – we were hoping to be back on the ice doing more exploration in a few weeks, but corona-virus disruption has pushed it back to autumn. Nevertheless, the exploration was exciting, scientifically interesting and helped to cement a strong team of scientists and explorers that will continue to work together for years to come.